Record-breaking flour packing in the "home of champions" 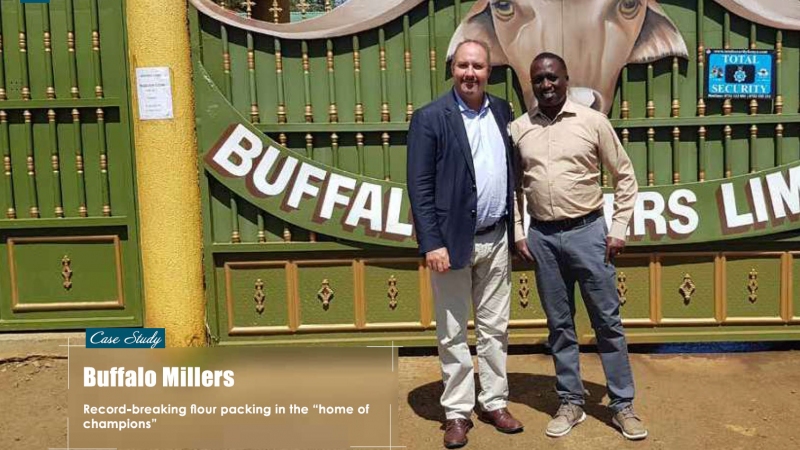 In the North Rift region of Western Kenya lies the city of Eldoret. The name 'home of champions' relates to the region's high altitude, it's where many of the Kenyan marathon and long-distance runners originate from or use as a training base.
If you arrive by air, upon touchdown, the cabin crew will gleefully announce to you; "welcome to the home of champions ladies and gentlemen."

Evans Kill was born and raised in Eldoret. His father was a local farmer and although Evans graduated from university as a mechanical & plant engineer, the love of the land was always in his blood.
He identified that there was a place in the market for a new mill in this rapidly growing city and therefore in 2013, he established a small, 20 tonnes per day maize mill and called it 'Buffalo Millers'.
Within the Kalenjin tribe in Kenya, family groups are identified by animal symbols and the Kili family comes under the symbol of the mighty buffalo and therefore what better name to bestow on the new milling enterprise. A brand name of 'Mfalme' was chosen which means king in Swahili and a glistening golden crown became the brand emblem.
The new brand gained instant success, to such a degree in fact, that one thing became rapidly clear - that 20 tonnes per day capacity was not enough to satisfy the demand for orders. Plans were drawn up to increase capacity and today the plant mills 100 tonnes of maize daily and continues to increase its share of the consumer-flour market.

Evans and his wife Batula now had the capacity but what they didn't have was a packing machine. In Kenya, the vast majority of flour, whether it be maize or wheat, is packed into one and two kilogram paper bags.

With the increased throughput and ever-increasing volume of orders, it was decided that an automatic packing machine should be the next investment. This would mean being able to pack quickly, hygienically, with a minimum of staff required and produce perfect 24kg bales, which could then be transported immediately by truck to retail outlets up and down the country.
Fawema from Germany was chosen as the supplier of the new machine. "I knew Fawema already and I knew that most of the mills in Kenya operate Fawema equipment. I also wanted the best machine available for my business," explains Mr Kill, when discussing the reasons behind his choice.
"Not only do Fawema provide the machine, but they also provide the local technical service and support, with an office in Nairobi staffed by Kenyan engineers trained in Germany. The support is excellent. We are continuously improving and enhancing our business with a strong focus on food safety.
"Having the Fawema machine now allows us to obtain ISO certification which in turn means that I can guarantee Kenyan supermarkets and retailers, that the products I supply to them are made and packed in strict conformity with international regulations on food quality and food safety. Since we started packing with the new machine, we have been breaking all the records in terms of output," he adds.

"The project at Buffalo Millers was particularly satisfying from my perspective," adds Mark Wild, the Fawema sales manager for Africa.
"From my very first meeting with Evans, I could clearly see the immense pride he had in every aspect of his business and it was so refreshing to do business with a man with so much enthusiasm and passion.
"We are equally proud to have had the privilege of assisting Evans in taking Buffalo Millers to another level and it was a great pleasure in working closely with him from start to finish," he concludes.